Have you ever had one of those days that was practically perfect? When everything in the Universe just came together to keep a smile on your face from morning ’till night? We love those days as they’re happening and the memories stay with us for years. I had one  yesterday, 12 hours of fun, sun and enjoyment with only one teeny, tiny fly in the ointment…..

Have you ever had one of those days that was practically perfect? When everything in the Universe just came together to keep a smile on your face from morning ’till night? We love those days as they’re happening and the memories stay with us for years. I had one  yesterday, 12 hours of fun, sun and enjoyment with only one teeny, tiny fly in the ointment…..

After a very satisfactory Pilates class which was, unusually, practically pain free, I ran around in the shower for 30 seconds (I was running late) and threw on my biking gear. My best friend turned up with his Cagiva Raptor (such a fun bike) and we set off to meet a couple of  other friends in some place that I’d never heard of and now can’t remember the name of. Running late was not much of an issue as Will rides fast….really fast, so the trip started with a fair amount of adrenaline coursing through my body…. 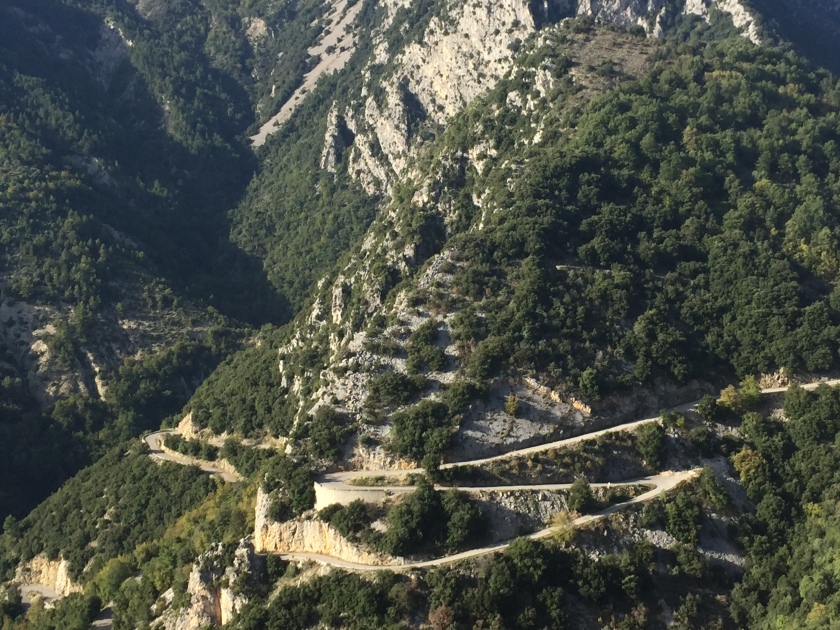 We hooked up with our friends at a cafe in the middle of a tiny village in the mountains. We ordered drinks, took off our jackets and basked in the 20+ degree sunshine; there wasn’t a cloud in the sky! Fortunately for me, my brain was having one of those days when it had decided to understand French and I not only followed the conversation but contributed a fair bit too, which is, in itself, unusual. We had decided to lunch at a small restaurant which sat at the top of endless flights of winding stairs. As is often the case in tiny French villages, it was closed; there were people eating but apparently they were all family…..

After admiring the breathtaking views and the beautiful tranquility of the place (the only sound to be heard was the faint rumbling of tummies; it was almost 2pm), we headed back down the stairs and to the cafe where we’d had our drinks. Fortified by huge sandwiches (half a french loaf stuffed with everything the cafe owner had to hand) we carried on chatting and laughing in the warm autumn sunshine. After about 5 minutes it was 3pm and our friends asked us if we wanted to see a house that they were thinking of buying. Yes indeed!

We were already in the mountains but the route that they took us on to get to this house went up…and up…and up via a series of bends of the kind that bikers dream about. The view, when we finally arrived literally left me speechless! The photos that I took can in no way do it justice, it was jaw-dropping, stunning! The house they were hoping to buy was ancient and tumbled down with grape vines, laced through the higgledy, piggledy architecture; it would need so much work but I could understand why they were so enamoured..

“Imagine waking up to this view every morning” said my friend. I could.

Anyway, we all parted company as one of them had to do a school run and we hit the open road again; it continued upwards. I have no idea how high up we were but my mind was blown time and time again by the views. We stopped several times to take pictures, including one of me perched on a small wall which was the only thing between the road and a sheer drop of many, many hundreds of metres. As many of you know I’m not keen on heights so this was another adrenaline rush and something that gave me a real boost in the self-confidence department.

Our final stop was in a forest. A gentle wind had started to blow causing the red, gold and brown leaves to gently swirl around us; I felt intoxicated by it all (admittedly that could have been down to the altitude) and completely, totally happy. That was until I realised that I really needed a wee……the coffee, orange juice and apple juice I’d had at lunchtime had all decided to arrive in my bladder at the same moment and it was ringing alarm bells. The thought then struck me that we were miles from anywhere….gulp!

I told my friend that we needed to go as I really needed to go and he suggested that I pee in the forest. There are many things that I will do, I’ll try most things at least once but peeing outdoors is not one of them. The ensuing eyerolls and manic hopping from one foot to the other persuaded him that finding a cafe would be a good idea and, happily, he knew of one not far away….

It was closed. Bugger!

Now, when you’re in a car, you can cross your legs and distract your bladder with a few well chosen tunes; both are impossible on the back of a motorbike. My friend rode like the wind as my mind and bladder joined forces to torture me for a good 20 minutes as we searched for a building with a toilet; by this point I was prepared to bribe or even beg homeowners. Just as I’d reached the point when I thought my bladder would burst we arrived in a village….in Italy.

I ran as fast as my boots would carry me, almost knocking over ancient locals in my mad dash for the toilet which was, extremely fortunately for all concerned, unoccupied. Oh my God! the relief! With an empty bladder and all previous good humour restored we sat at the cafe for a while and chatted about happier things.

I have absolutely no sense of direction as you know, so I’m not quite sure how we ended up in Italy but we did and I enjoyed the atmosphere of the quaint little town as I sipped hot chocolate. We’d ridden and chatted for so long that the sun was beginning to go down so we decided to ride back to France and have dinner which was absolutely delicious. So, after going out for lunch at mid-day, I finally got back home at around 9.30 last night; I really love my life sometimes :O)

Have you ever had a day like that? It might not seem that special to anyone else but, for you, it was pretty much perfect? If you have please share it with me, I’d love to hear from you.

Do you have a plan or are you more the fly by the seat of your pants type of person? Can you be found making lists and schedules before any excursion to ensure that everything passes off perfectly or do you grab a bag and fly out the door? Organised or spontaneous?

Do you have a plan or are you more the fly by the seat of your pants type of person? Can you be found making lists and schedules before any excursion to ensure that everything passes off perfectly or do you grab a bag and fly out the door? Organised or spontaneous?

I like to think that I’m organised but I’m really not and I find that my plans very rarely work out as I expect them to. Today, I’m meeting a friend and the plan is that we will go for a long walk in the mountains, commune with nature and then stop for lunch before heading back. Sounds like a plan?

I know that there will definitely be mountains, albeit not very big ones (about 650m up) but I also know that to get to the part where we’ll start communing we will have to pass lots of little boutiques and coffee shops and I can’t help feeling that I’ll end up less Bear Grylls and more Carrie Bradshaw.

The idea of walking up in the beautiful sunshine to arrive at the summit and marvel at the stunning views is really appealing…..in my imagination…..The reality is more likely to be hot and sweaty (supposed to be 25 degrees today), arriving at the top with wobbly legs, totally unable to appreciate the view due to the gallons of sweat that have poured into my eyes and the inability to remain standing. Saying all that I can’t help but feel that I would have a real sense of achievement so………there’s no real sense of focus here is there? Maybe that’s why I’m rubbish at planning? Perhaps I should just keep it simple.

The plan for today is to meet my friend. What happens from there I’ll wait and see (that’s probably more apathy than spontaneity if I’m honest!)

Are you a meticulous planner? If so can you give me some handy hints on how to be more organised?

Have a great day everyone, whether it goes to plan or not ;O)