I’m sure you’ve seen this on the news or Twitter or Facebook or…..well pretty much anywhere really; there are probably even subterranean life forms debating Boris Johnson’s unfortunate comment at the moment. Do I mean ‘unfortunate’? Actually I’m not sure I do as that would imply that there was some element of bad luck involved whereas this was less to do with luck and more to do with judgement….or lack thereof.

I’m sure you’ve seen this on the news or Twitter or Facebook or…..well pretty much anywhere really; there are probably even subterranean life forms debating Boris Johnson’s unfortunate comment at the moment. Do I mean ‘unfortunate’? Actually I’m not sure I do as that would imply that there was some element of bad luck involved whereas this was less to do with luck and more to do with judgement….or lack thereof.

There is no doubt in my mind that the subject of banning the burka (or actually the niqab as that’s what the veil is called) is one that needs to be discussed in an adult and rational manner. Unfortunately a somewhat tactless politician and the British media got involved so the whole thing has descended into mud slinging and foot stamping with some accusations of racism thrown in for good measure.

What makes it worse (or ironic if you prefer) is that both sides are arguing the same thing but from different sides – oppression.

This gives us a ‘damned if you do, damned if you don’t’ situation for Governments who are trying to decide whether a ban is a good idea or not. Personally I am not a great one for ‘banning’ anything and I think that Governments interfere far too much in the lives of ordinary people to the point where thinking for oneself seems to be actively dissuaded. With that in mind I decided to look into the origins of the veil to see if a solution could be found that would be agreeable to both sides.

Oddly enough, the first quote from the Qur’an I came across is actually directed at men and not women and was an instruction from Allah to the Prophet Muhammed:

““Say to the believing men that: they should cast down their glances and guard their private parts (by being chaste). This is better for them.”

This exact command was also then given to women. The message is clear; as was the norm 1300+ years ago, women should be modest in their dress and behaviour and men should not look lustfully at women (other than their wives). This seems fair and reasonable as it applies to both men and women and implies that there should be mutual respect between them. However, I fail to see how and instruction to both men and women about keeping their eyes downcast has translated to women covering everything but their eyes (except in some countries such as Saudi Arabia where even that may be required).

The next quote offered as evidence for the wearing of the veil was this one:

““…and not display their beauty except what is apparent, and they should place their khumur over their bosoms…”

The khumur is a head-covering so we can assume that the advice is to allow the ends to trail over the chest area thereby covering up the breasts or that the head covering should/could be used to cover the breasts. Again, 1300 years ago pretty much ALL women wore head coverings and some, in the UK for example, wore veils and wimples (like those still worn by nuns today). However, for me (and I admit I am no religious scholar) this still does not indicate that a woman’s face should be covered; ‘except what is apparent’ would lead me to think of the face as ALL women, at the time, covered their hair and bodies as a sign of modesty.

My conclusion from this is that IF women choose to cover their bodies and their hair for whatever reason, whether it be religion or personal modesty, more power to them, it is not for any of us, male or female, to dictate what anyone else should wear. However, as covering the face completely does not appear to be a requirement on religious grounds and creates a security problem, as we not cannot identify the wearer, it would not seem unreasonable to ban the niqab.

What we should perhaps avoid (take note Boris) is taking a highly emotive subject and making an, honestly, pretty weak joke about it. It didn’t offend me (although I can see how it would offend others) and I think that it has been blown out of all proportion by the media (surprise, surprise) but this really was a case of ‘engage brain before opening gob’! Free speech should be something that we all hang on to for dear life as, without it, we are destined to end up like Winston Smith but, if you stick your finger in a hornet’s nest, you have to accept you’re going to get stung. I think Boris is probably used to being stung and doesn’t a great deal but it’s a shame that his words have pretty much buried the opportunity to have a sensible discussion; ho hum! politics would be so much easier without politicians ;O)

This is all just my opinion based on what I’ve read on the subject; I’d love to hear yours!

How did I end up here? In a 50ft x 50ft box, all alone with no-one to talk to? I know I shouldn’t complain because I have everything I need; I receive meals three times a day, I have my work, I have machines to exercise, my computer to record my thoughts, books to read and I know that I am completely safe. There is no fear in my world because I know that I cannot be harmed, physically, mentally or emotionally but I am so desperately lonely. I don’t know exactly why these feelings started in me because this is the norm, it’s been my reality for as long as I can remember; I was born here…..

How did I end up here? In a 50ft x 50ft box, all alone with no-one to talk to? I know I shouldn’t complain because I have everything I need; I receive meals three times a day, I have my work, I have machines to exercise, my computer to record my thoughts, books to read and I know that I am completely safe. There is no fear in my world because I know that I cannot be harmed, physically, mentally or emotionally but I am so desperately lonely. I don’t know exactly why these feelings started in me because this is the norm, it’s been my reality for as long as I can remember; I was born here…..

It’s been drilled into me, every day, that this is the best possible life that a human being can have and I know that’s the case because I’ve watched the history files. There used to be something called ‘hate’; I’m not sure I really understand the concept but I’ve seen the damage that was done because of it. The Council memo files tell us that, many years ago, people could ‘talk’ to one another on their computers.  They searched online for people who had the same thoughts and ideas and then, when they had established themselves within a certain ‘group’ (I believe this to be a collection of individuals but that’s not clear from the memos) they would exchange ‘hate’ with members of other groups. 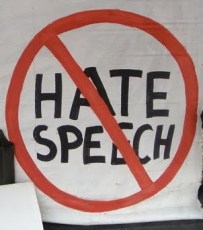 The Councils at the time (I believe they were called Governments) introduced rules to try to stop this from happening, this ‘hate speech’. They created punishments for groups who said bad things about another group based on their colour or their religion (I’m sorry but I can’t tell you what this is; the word is used in the memos but there is no explanation with it). The rulers thought that these punishments would stop the ‘hate’ but it did not because it did not apply to all groups. There were many who protested because they had felt hurt by words themselves but the ones that had used them were not punished. More and more groups were protected over time as the ‘Governments’ tried to stop the ‘hate’ but it didn’t seem to make any difference.

When the ‘hate’ became very bad the ‘Governments’ decided that the only way they could stop it would be to ban what they called ‘free’ speech. Rules were put in place to determine what was ‘acceptable’ speech and what was not and, again, those not adhering to the rules were punished. By this time, so the memos tell us, almost all groups were being hurt by words, every day, and they felt great ‘pain and suffering’ (again I can’t really explain what this means and these concepts are alien to me). From what I’ve gleaned from the history books, it was about this time that ‘safe spaces’ were first created to offer groups protection from the hurtful words that were causing them so much pain.

I think that the ‘great rebellion’ started shortly after this because some people thought that the banning of ‘free’ speech and the ‘safe spaces’ (which had become mandatory for all groups by this time) were dangerous. I cannot understand why as, it seems to me, that the ‘Government’s were only doing what the people had asked – protect them from the ‘hate’ speech. Apparently it also had something to do with the universal ‘safe spaces’ which I think were called ‘countries’ at the time. One of the biggest ‘countries’ closed its borders, creating the first universal ‘safe space’ and all others then followed suit as it was deemed the best way to protect the group. Unfortunately, the ‘hate’ didn’t stop.

Before the ‘great rebellion’ the ‘hate’ was between individuals but, over time, it developed and grew: small groups ‘hated’ each other and then bigger groups and bigger still until there was ‘hate’ between the universal ‘safe spaces’. Many groups were destroyed in the name of ‘hate’; this destruction was known as ‘war’ apparently and it very nearly caused the end of the human race but, thankfully, there were enough individuals left to form the Council as we know it today.

The first council first started a mating programme to guarantee the survival of our species and then they set about ensuring that ‘hate’ could never happen again. The plans that they put in place were 100% successful and, because of them, I know that I will always be safe but I am not sure that they were right. I shouldn’t question them, I know, but surely there was another way; I am alone because of these 5 rules:

It’s almost midnight and I know that, in a few minutes, these thoughts will be wiped away, lost forever and I feel something about that; it has always been so but today I feel different. There is something hot inside my chest that is suffocating me, I want to do something to stop this feeling……..I want to destroy something…….is that what they used to call ‘anger’? As every second passes it is becoming stronger and stronger, it’s overcoming even the loneliness, the ever fucking present loneliness…….this is not fair, my life should not be like this…….I HATE my life!!!!!