…beauty is in the eye of the media

It would seem these days that beauty is in the eye of the media; there are millions of images on the TV, in magazines, on the internet etc. all telling us what we should or shouldn’t look like. Unfortunately, as with all things, the media is not exactly consistent. 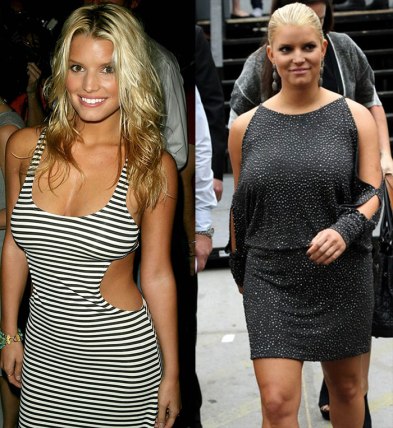 How many times do we see pictures like these? ‘So and so celebrity has really piled on the pounds!’ Then the next day ‘so and so celebrity is too skinny’; ironically it’s often the same celebrity who was lambasted for being overweight 6 months previously.

If you type ‘celebrities who’ve let themselves go’ into google it will bring up hundreds of people who have simply got older or lost/gained a little weight. So celebrities are human huh? Shocker! (This comes with rolling eyes and a slight feeling of exasperation).

The question is where does this leave the rest of us mere mortals? Well, we now have young people who become anorexic or bulimic because their onscreen role models are a size 6. It doesn’t occur to them to question whether or not said idol is happy being that size or whether their job (and the media) demands that they are slim and actually they’d really like to be able to have a dessert occasionally. It doesn’t occur to them to question whether or not they will be healthy as a size 6; if you’re naturally slim it’s one thing, if you’re naturally a size 14 and shrink yourself down to a size 6 is another thing altogether. They also don’t consider the fact that many stars have personal trainers and spend hours in the gym with them every day; to lose weight without exercise will mean a big and potentially dangerous reduction in calories.

On the flip side we now also have Fat Acceptance (or Body Acceptance) which is essentially people who are overweight, and know that they’re overweight, fighting back against Fat Shaming.

(This is the charming past-time of being unpleasant to people considered fat by ‘shamers’ on social media.) There is even a Fat Activist movement which addresses the issue of, what they see as, society’s ‘bias’ against obese people.

This means that, on the one hand we have young people desperate to be skinny and, on the other, we have those who are obese calling for fat-shaming to be considered a hate crime. It’s well known that both anorexia and obesity come with massive health risks and yet both are on the increase.

Part of the obesity problem can certainly be attributed to the fast and convenience food that has become a staple for many people. Sugar is believed to be more addictive than cocaine and yet these type of food are absolutely packed full of it. However, another part of the problem is our attitudes to ourselves and our bodies and the fact that open and honest discussions are few and far between. The Government is seen as ‘the Nanny State’ if it advises people on the health risks of obesity and anorexia, schools no longer teach classes on cookery and nutrition, children are happier in front of a computer screen rather than being outside running around and the internet provides a safe haven for advocates of over-eating and starvation and the bullies that follow them. If we could all see the damage that’s being done to our insides maybe we’d be less concerned with how we look on the outside……….