Do you have any phobias or fears that you know hold you back in some way or stop you from trying something that you’d really like to do? Mine has always been a fear of heights; three rungs up a ladder and my knees seem to liquefy and my stomach feels as though its full of butterflies…on speed!

Do you have any phobias or fears that you know hold you back in some way or stop you from trying something that you’d really like to do? Mine has always been a fear of heights; three rungs up a ladder and my knees seem to liquefy and my stomach feels as though its full of butterflies…on speed!

Now, as I like to travel, I’ve had to conquer my fear of flying and, on the flight back from the UK I actually managed to look out of the window during take off and landing without having a fit of the heebie geebies. That gave me a bit more confidence, to the point that I started thinking  about jumping out of a plane (attached to someone who knows what they’re doing and with a parachute obviously); the thought no longer scared the crap out of me. Oddly, the fear is less when I’m 35,000 feet up in a plane than when I’m standing on a ladder…

One of my closest friends, Floriane, knows about this fear and does everything she can to support me and help me get over it, including taking a 4 hour round trip that should have included a bungee jump somewhere in the middle. After I went as white as a sheet and bottled out, having briefly glanced over the edge of the bridge into the abyss below, she didn’t complain or try to bully me into it, she just said ‘OK we’ll start smaller’.  From that point on, we have climbed stairs up to castle ramparts, walked along walls and generally taken every opportunity to get high…no wait that doesn’t sound right…high up maybe?

Anyway, yesterday we decided to take a walk in the mountains. It was a beautiful day, warm and sunny and, as we hadn’t seen each other for a couple of weeks, we had plenty to catch up on. We walked upwards and onwards and eventually reached the top and WOW!! What a view! Here, I took a couple of photos for you: 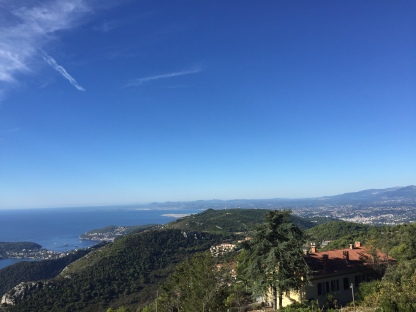 They can’t do justice to that view but they’ll give you an idea – the sea on one side and the Alps on the other, just amazing!

We carried on and came across an old fort with a wall all round it (I’m sure there’s a name for the particular construction but I have no idea what it is). I looked over the edge – OK no  problem – then Floriane proposed that I stand on the wall…hhhmmmmmmm. The drop was around 20 feet I suppose, I can’t be sure as I’m rubbish with estimated measurements (although, allegedly, men find this quite endearing) but, for me with my 3 rung issues, it was pretty damned high. What did I do?

I stood on the wall! I wasn’t particularly comfortable and I can’t say I enjoyed the experience but my knees remained in solid form and I felt pretty damned proud of myself. In terms of conquering this particular fear, it’s one step at a time (although, in the case of this particular construction, not literally…for obvious reasons ;O) )

What about you? Any fears that you’re trying to conquer right now? Let me know, I’d love to hear from you