All of this really goes to show that what what we perceive as being healthy may not necessarily be so and, frankly, any processed foods (including most sliced bread that you find in supermarkets) will never be as healthy as those that Mother Nature provides for us!

How do products that were introduced to help people who suffer from medical conditions become ‘fashionable’? A good example is gluten free food which was initially marketed to people who have Celiac disease (or wheat intolerance) but now seem to have found their way into the mainstream. For some reason, people seem to have got it into their heads that gluten free = healthier; is that really the case? 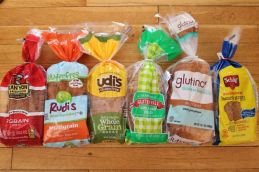 If you have ever tried gluten free bread, you will know that it lasts forever without going off (when I say forever that’s a slight exaggeration but it will be at least a week). It does then beg the question – what’s in it to keep it fresh for so long? Well, here’s the ingredients list for one of the most popular:

You will see that there are 3 different types of starch: tapioca, potato and the mysteriously named ‘modified food’ starch. These are all used as thickening agents in the bread making process and whilst the first two, tapioca and potato, are words that are familiar to us ‘modified’ is not so clear – what is it that’s been modified and, more importantly, why? In the case of gluten free bread, the food that has been modified is unlikely to be wheat but could be corn or rice. These natural ingredients are then mucked about with in any number of different ways from roasting them, to adding a positive electrical charge or treating them with either potassium or sodium hydroxide…..sounds appetizing?

From starches, we move on to sugars in the form of dried cane syrup, tapioca maltodextrin and tapioca syrup. All of these ingredients have next to no nutritional benefit but are all high glycemic refined sugars which will cause your blood sugar to spike. They will give you a quick burst of energy which will wear off very quickly and leave you craving more.

Moving on, canola oil is our next ingredient; don’t make the mistake of thinking that this is something similar to olive oil or rapeseed oil, it isn’t. It’s very cheaply produced which is presumably why it’s popular with food manufacturers and it’s also genetically modified. Added to that it is also often a refined oil which means that it is partially hydrogenated and therefore contains trans fats which are well known to have a very negative effect on heart health.

The last unfamiliar ingredients (at least unfamiliar if you make bread at home) will be the various types of gum which are used. These are not considered to be harmful and are used as thickening agents and stabilizers; they are created by fermenting sugars with a specific bacteria. That said, they can in no way be considered natural ingredients.

All of this really goes to show that what what we perceive as being healthy may not necessarily be so and, frankly, any processed foods (including most sliced bread that you find in supermarkets) will never be as healthy as those that Mother Nature provides for us! Aside from all that, if you don’t have Celiac disease but eat gluten free product anyway you will be limiting your consumption of whole grains which have been proven to help with heart health.

For comparison, this is the list of basic ingredients that you will need if you make bread at home from scratch:

As you can see there is something of a difference between the two lists of ingredients, in fact, one bears no resemblance at all to the other!