We are constantly being advised that it’s not healthy to be overweight. It’s true, if you are obese you are more likely to suffer from all sorts of health related issues such as diabetes, heart problems, high blood pressure and breathing problems. That said, if you are underweight you may end up with a weak immune system and fragile bones so a happy medium is always the ideal.

An overweight woman walks at the 61st Montgomery County Agricultural Fair on August 19, 2009 in Gaithersburg, Maryland. At USD 150 billion, the US medical system spends around twice as much treating preventable health conditions caused by obesity than it does on cancer, Health Secretary Kathleen Sebelius said. Two-thirds of US adults and one in five children are overweight or obese, putting them at greater risk of chronic illness like heart disease, cancer, stroke and diabetes, according to reports released recently at the “Weight of the Nation” conference. AFP PHOTO / Tim Sloan (Photo credit should read TIM SLOAN/AFP/Getty Images)

I think that we can all agree that neither of these images presents a picture of perfect health and yet one of the women will likely be an object of derision and the other is modelling on the catwalk in a fashion show.

Around 725,000 people in the UK have an eating disorder and, in America more than 35% of people are considered obese. How have we managed to create a culture where people have so many body issues? Many say that the media is to blame; if people are looking for body images to aspire to it’s pretty difficult to live up to something which has been airbrushed and digitally enhanced. Essentially you are on a hiding to nothing right from the start – if you try change your body to copy an image which is not even real your self-esteem is bound to suffer. So why not just make the best of what you’ve got and be happy with that? It would make life so much easier.

If you’re carrying a few extra pounds you might have got the idea in your head that you can’t go out and exercise because people will laugh or tease you – so what? What does it say about them? People’s negative comments usually stem from their own insecurities; how many people will make nasty comments about another person when they’re on their own? Very few, usually its one person in a group who will say something in attempt to get recognition from the others. The only reason they do that is that they don’t believe in their own self-worth i.e. they don’t feel that giving information about themselves will be of interest to their ‘friends’ so they look for someone else to target and deflect attention. Ridicule of another person never comes from a good place.

If you’ve decided that you want to change something about your body look at exercise types which are going to be low impact such as swimming, walking or yoga as you will have less risk of injury and you will see noticeable improvements in a relatively short space of time which will give you the encouragement you need to continue. If your aim at the start is to run 26 miles it will be easy to feel defeated and there will be a bigger chance that you’ll give up; if your aim is to walk a mile and you achieve it after 2 weeks how amazing will that feel? You’ll have a great sense of achievement and then will want to push on to the next mile and the next. As with anyone who has taken the decision to up their exercise, you will begin to feel so much better about yourself that you will undoubtedly want to make other important life style changes. Before you know it, you will have a whole new wonderful you! 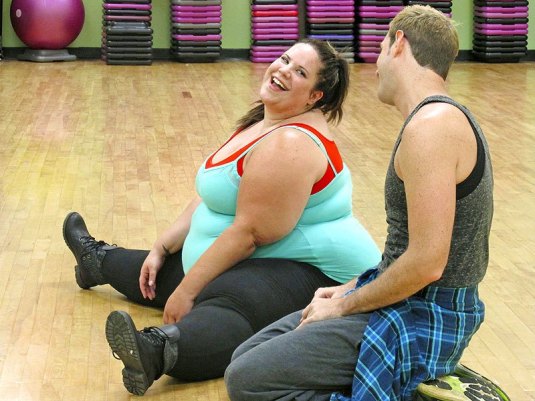 Everyone should be allowed to make decisions about their health and their body without interference and, if they are happy with the results – super! The ultimate that we can achieve in life is to wake up every day smiling and without a care in the world, secure in the knowledge that we are exactly as we want to be. Thin, fat, old, young, tall or short – we are all truly beautiful when we smile.

2 thoughts on “Living it Large”